Paco and the Popping Peppers Slots 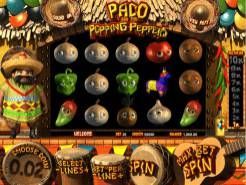 Play Now
Given the title, you can probably imagine what this slot is going to look like. We meet Paco as soon as the game begins, standing to the side in a bright top and sombrero. He is standing next to a hut and the reels of the game appear on a dark background inside the hut. That’s where you may just get to meet the peppers of the title.

There are five reels inside that hut, bearing 30 lines winding their way across them.

Since this is a Betsoft game, we get coins going from two cents to 50 cents. It also lets you play up to five of them on each line.

Paco and the Popping Peppers icons to look for

The game includes something called a pop multiplier. Whenever three or more symbols form a successful line, you will see the multiplier increase. A free spin is also granted. It is possible to carry on doing this until you get a losing spin. The biggest multiplier value is 10x. Watch out for a pinata to appear shaped like a horse. This is your wild icon. It also replaces everything with zero exceptions in this case. That’s unusual.

Can you see any beach huts appearing on the reels? If three pop up in one spin, a Higher or Lower game will begin. This is a bonus in which you decide whether the next card in the sequence will be higher or lower. You can get it wrong and stay in the game, but only up to three times. There is a chance to play up to 10 rounds of this bonus, so if you manage to go all the way through it, you could snag a nice instant coin prize.

Prepare to play the Paco and the Popping Peppers slot today

This is a great game to play and since it features exploding symbols in the pop multiplier part of the game, it is nice to see what happens on each spin. If you get a prize, it could be possible to string a few together while paying only for the first spin. The more prizes you can get in a row, the better and bigger that pop multiplier will become. Check out Paco and his Popping Peppers today.
Play Now
Previous slideNext slide