Megawins Slot is a Blast from the Past 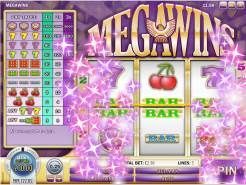 Play Now
Don’t ever let it be said that older slot-styles no longer appeal to the general public. In fact, Rival Gaming is betting against that idea with their introduction of the sizzling new MegaWins slot, which, although it lacks all the bright and loud bells and whistles of the average Interactive slot these days, is a worthwhile blast from the traditional past. With 3 reels and 5 paylines, you can get some nice combinations here and count your collected winnings. It’s the definition of retro-gaming, with the twist of modern payout amounts. If there’s another good thing about MegaWins, it’s that you don’t get distracted at all while playing. The money is very real; this game lets you focus only on playing the reels and placing your bets. There are Lucky 7’s, cherries, and the traditional Bar sign in various colors serving as the symbols; a pay table is conveniently located off to the side for reference. The classical styling won’t get in the way, nor will it get old, as the symbols and notations are so easy to read. There’s a Megahawk icon that can really pay out the big bucks, too, so look for it as the cherries and traditional bar symbols whiz around the reels. So, to round out the introduction to this new and exciting traditional slot from Rival Gaming, go into gaming with the following info: the cherries symbol pay out when you get a double or triple hit on the reels, and the Megahawk produces some seriously impressive payout amounts. Not surprisingly, MegaWins is a winner!