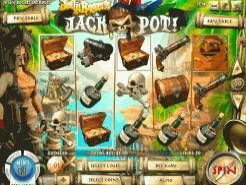 Play Now
Sail the seas with Jolly Roger and his pals in Jolly Roger's Jackpot slots. With this game, you can win a lot of cash with a coin value of a penny to 25 cents. Set at 25 cents, you'll wager $62.50 per spin on the 50 lines and have the chance to win $1,250 on just one line.

How Much Will You Win With the Other Pirate-Themed Symbols?

Jolly Roger and the symbols in the game are all animated. They have fitting audio that plays when three or more symbols form a winning line. The gun is the lowest in value with a top payout of 65 coins After that is the skull and crossbones worth 4 to 75 coins, the bottle of rum worth 5 to 90 coins, and the treasure chest worth 6 to 100 coins. Things keep improving from there. You can win: Jolly Roger is the best of all of the symbols with a top prize of 5,000 coins. His pirate mate is an expanding wild found on the first, third, and fifth reels. When he appears, he expands to fill the entire reel. It makes it very easy to win bigger prizes.

The Female Pirate Leads to the First of Two Bonuses

Three or more of the female pirate (Lady Red) triggers the free spins bonus You get 10 free spins when she appears three times. If Lady Red appears four or five times, you win 20 or 50 free spins, respectively. Prizes collected during the free spins rounds are tripled. On a 10-cent coin value, 10 free spins lead to $173.50 in payouts.

All About the Attack Rival Ships Bonus Game

Three pirate ships on the reels trigger the bonus game. Watch the horizon for incoming ships. Fire your cannon at them and pick up the bounty that was hiding on board. Watch the reload meter and get ready to aim and fire at the next ship. You get three shots in all, so don't miss your opportunity to collect thousands of gold coins and gems. How valuable is this bonus feature? I won 5,750 in coins, so it's very rewarding. It's your turn to win. You're sure to love this pirate slot. Play Jolly Roger's Jackpot now and let the jolly pirate cheer you on.
Play Now