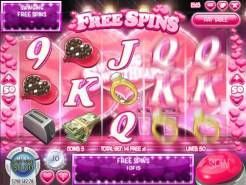 Play Now
Developer Rival have become well known for their holiday themed slot games over the years and Swinging Sweethearts is Rival’s nod to Valentine’s Day and the traditions associated with it. Bettors will notice quickly that this game is geared toward players of the female persuasion but can be a big winner for anyone who spins the reels. This slot is based on the cheesy game shows that assured contestants and viewers that Mr. or Mrs. Right could be found on a game show back in the 1970s.

Pretty in Pink…Lots of Pink

This game is so pink that it could easily be mistaken for a Susan G. Komen Foundation fundraiser; the background and the reels are colored in several shades of pink with a little bit of purple. The majority of the symbols are romance related with a rose, a box of chocolates, cash and the diamond engagement ring that awards the jackpot. The male contestants of the game show Dale #1 and Dale #2 vie for the affections of the blonde, Bernadette, who acts as the wild symbol in the game and can replace all icons on the reels except the master of ceremonies, Slick Rick, who represents the paying scatter and awards the free spins and the swinging free spins that can lead to exceptionally large prizes.

Betting on Bernadette and the Dales

Swinging Sweethearts is a game with five reels and 50 paylines; coin sizes range from $0.01 to $0.25 and up to 10 coins can be wagered per line. This gives the Rival title a single spin bet variance of $0.50 to $12.50, which may look small to those who prefer to wager large amounts on a single spin. The conjoined scatter and bonus games cannot only give players a large number of free spins but also the chance of a large multiplier can make one spin worth more than some the showcases featured on popular, televised game shows.

The most exciting features of this game focus around Slick Rick, a Wink Martindale look-alike that triggers the scatter and bonus games. When three or more Slick Ricks appear on the reels, the player will receive 1X to 25X the bet on that spin, making for a win of $0.01 up to $312.50, and 15 free games; during those free spins three or more Slick Ricks will give five Swinging Free Spins. During regular spins, Bernadette is a wild with a 4X multiplier on any wins it may create; during the free spins the wild will give a 8X multiplier to any wins it creates and the swinging free spins round gives any winning paylines with Bernadette a 12X multiplier. A single spin on the slot has the potential to create a massive win in a small amount of time with this bonus content.

Anyone who thinks this title may be a little too bright should grab a pair of shades and give it a few spins; this is a game with great potential that no one should skip over for any reason. The paying scatter, free games and the potentially high multipliers can add up to an insane amount of money on just one turn of the reels. While Swinging Sweethearts may be decorated in pink, those who play it may end up looking at some serious green.