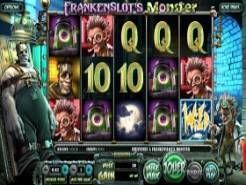 Play Now
Frankenstein is perhaps one of the most famous novels of all time. Many people think this is the name of the monster, but it was the name of the doctor who created it. That’s why this Betsoft slot game is called Frankenslot’s Monster – designed to pay tribute to the book while creating a slot game twist for us all to enjoy.

The format used here is familiar indeed – five reels provide room for us to play on 20 lines.

You can start from two cents per coin, with the option to increase that value to a dollar at most. The game also permits a line bet of up to five coins at a time.

Frankenslot’s Monster icons to look for

The game’s scatter will only appear over the middle three reels of the game. It uses that word too, so you cannot miss it. It is displayed on some machinery. Meanwhile, the creators have spelt out WILD for us too. This one looks as if it has received a shock, as it is written in sparky letters. The game also includes a bonus symbol.

The monster appears to the side of the reels as you get things underway here. However, the bonus feature – triggered by three bonus icons – will give you a chance to send a shock to the monster. Not very friendly, but it will result in a coin prize worth up to 25x the bet that triggered the bonus. Meanwhile, three scatters will bring you the chance to play eight free games. These can be retriggered if you get the same three icons showing up again. Every spin received in this feature guarantees one, two, or three wilds added to the reels for a chance at some spectacular (or at least some nice) wins.

This is a lovely game, one that takes a cartoon element and adds it to the story we know well. You may feel sorry for the monster but don’t worry – he looks to be enjoying himself if you ever manage to net a prize or two. Frankenslot’s Monster is available to play from Betsoft and comes with a demo mode so you can check it out first too. Who wouldn’t want to do that?
Play Now
Previous slideNext slide