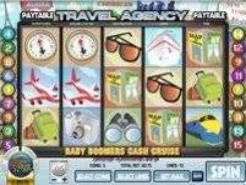 Play Now
The Baby Boomers generation is often seen as having wealth and privilege, because they grew up during an era of widespread government subsidies and increasing salaries. That said, it's no surprise that this same generation can afford to take lots of cruises. Rival Gaming's Baby Boomers Cash Cruise takes off on this idea. This 5-reel, 15-payline slot gives you the chance to visit a number of exotic destinations, including Australia, Greece, Japan, and the Caribbean. This obviously sounds like a fun theme in theory. But is it worth taking the trip with Baby Boomers Cash Cruise? Find out as we discuss everything that slot has to offer.

Choose Your Destination and Head for Paradise

Baby Boomers Cash Cruise starts with an entertaining introduction that shows postcards of different countries and major cities being tossed onto a desk. You're then prompted to decide where you want to take your ideal vacation. You don't immediately choose where to go, but rather read about a bonus round that sees you spin a wheel and plan your vacation. This game also gives you a look at various on-board activities, including bingo, shuffle board, and skeet shooting. You're then taken to the reels, where you'll see the postcards in the background and hear an energetic tune. The music doesn't really match the game theme and seems more fitting of a spy or police slot. The graphics are the typical cartoonish style offered in all Rival games. They don't look as sharp as Rival's usual efforts, instead appearing muted and washed out. Symbols include a train, cruise ship, bus, luggage, camera, passport, airplane, map, sunglasses, compass, globe, and binoculars. The bus is wild and substitutes for everything except the cruise ship to form payouts. This icon also pays the most, offering 5,000 coins for 5 buses in a line.

Baby Boomers is a standard 5-reel slot that offers adjustable paylines and other options. You can change lines from 1-15, coin size from $0.01 to $1.00, and coins per line from 1-5. These options allow you to bet as little as one cent per spin or as much as $75. You can also use the autoplay option to keep the reels spinning with your selected betting options. Just click the Auto button near the Spin option to get the reels going. Also note that autoplay is only available during real money play.

Landing 3 or more cruise chips on the reels triggers the Destination Wheel. This wheel is marked with credit prizes ranging from 75 to 6,000, and trips to Alaska, Greece, the Caribbean, and other popular tourist spots. If the Destination Wheel awards you a trip, you'll be taken to new reels with symbols that match the destination (i.e. Greece has icons matching the country and culture). You can also trigger random bonuses that give you a chance to play fun games like bingo, shuffle board, and skeet shooting, much like a real cruise ship offers. These second-screen rounds all give you a chance to rack up additional credits through entertaining side games.

Baby Boomers Cash Cruise Is Worth a Couple Trips

We like the concept and bonus rounds more than anything in Baby Boomers Cash Cruise. This is far from the first cruise-themed game, but it has better bonuses than any similar slot that we've tried. We also love the introduction and how it sets you up for an exciting adventure. Downsides to Baby Boomers Cash Cruise include the mismatched music and muted graphics. We were a little disappointed to see the graphics after such a fantastic intro. But overall, Baby Boomers Cash Cruise has enough going in its favor to be worth a few tries. It's especially worth playing until you unlock the Destination Wheel and visit some of the vacation sports.
Play Now
Previous slideNext slide